After my grandfathers memorial my wife and I decided to head to New Orleans and share some culture with our children.  Maybe too much culture for the thirteen year old in the course of a day.  But none the less, one can’t become worldly if they don’t get out in the world.

My grandfather often talked of his adventures in New Orleans and as you probably know by now it is one of my favorite places to visit.  He and I only made one trip there together, but he spoke of the places he would hang out at.  We ended up taking the kids to Preservation Hall, Cafe Du Monde and Jackson Square and let them enjoy themselves while listening to street musicians, eating some great food and watching some of the local performing artists.

We managed to stay mostly dry as scattered thunderstorms continually passed over providing us the benefit of lowered temperature and lower humidity.  The cloud coverage and wet ground also provided some nice light for photographing the city as well as reflections. 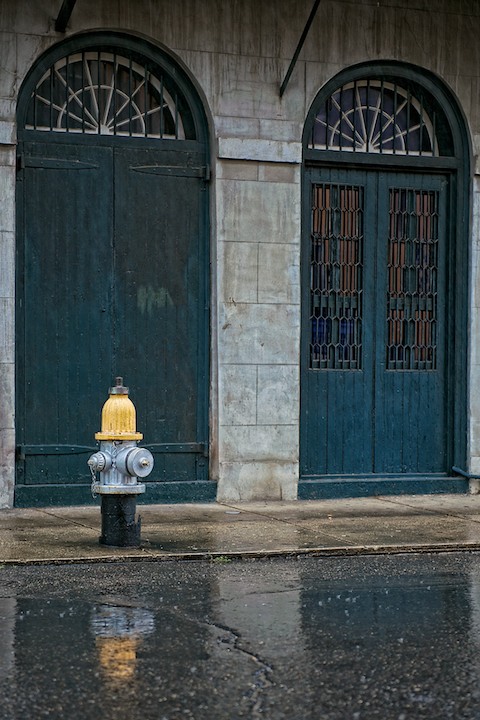 This door and fire hydrant were just begging me to a photo while we sat and waited for the naked bike parade.  Remember my comment about too worldly?  Yea, there aren’t too many places I know of that can get away with having a naked bike parade in the middle of the city during the middle of the day.  But that is just one of those things that makes New Orleans such a fun little city.